Some of the noisiest and most commonly seen parrots in Australia are the large white corellas and cockatoos – huge flocks can often be found congregating loudly near their roosting sites, like these Little Corellas at Carine Open Space. These birds all feed on the ground and seem to have adapted well to human landscapes, to the point of being pests.

A Little Corella balancing comically before its evening drink

Squabbling Little Corellas, a common site in parks in Perth 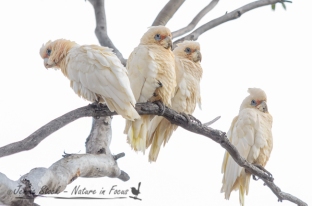 In Western Australia, a feral population of the Long-billed Corella has established after aviary releases. Destructive pests in WA and their native Victoria, they damage crops and chew cabling, reticulation pipes, and even tarmac. On the East Coast, the Sulphur-crested Cockatoos can be just as destructive – I’ve seen them completely wrecking the fittings on street lights, seemingly just for fun. Certainly no-one can watch any of these birds for long and not be amused by their antics. They make great photographic subjects.

Sulphur-Crested Cockatoos feeding on the ground in Canberra 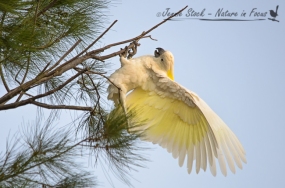 A very serious Long-Billed Corella, an Eastern states species that has become established in Perth

Sometimes known as the rock stars of birding, Carnaby’s Cockatoos are loud, messy and very engaging. Endemic to the south-west corner of Western Australia, they (and the closely-related Baudin’s cockatoo) are endangered, threatened by habitat destruction and competition for the limited number of nest hollows. Luckily they do seem to be adaptable with regard to their food requirements, expanding their diet to include the seeds of commercially grown pine trees (see here for a research paper on this topic). They probably still prefer their traditional diet of native plants like dryandra and hakea. As with most cockatoos, they form lifelong partnerships with their mates. 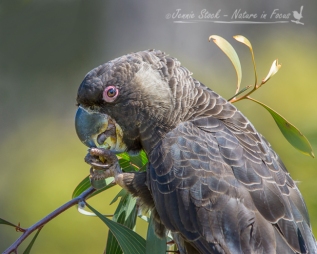 Carnaby’s Cockatoo feeding on a hakea in a Perth garden

Disregarded by many Australians as a noisy pest, Galahs (also known as Pink and Greys) are a very attractive bird that visitors enjoy seeing. Another species that has benefited from our changes to the environment, they are common in most rural areas of Australia as well as in many urban areas, where they feed on our handily provided green lawns. They usually nest in tree hollows and have been know to debark trees to prevent predators climbing up the trunks. As with most birds in this group, they are noisy but lots of fun to observe. 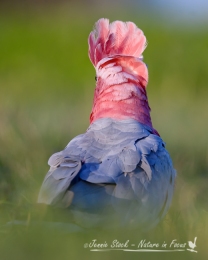 Galah with crest blown up by the wind 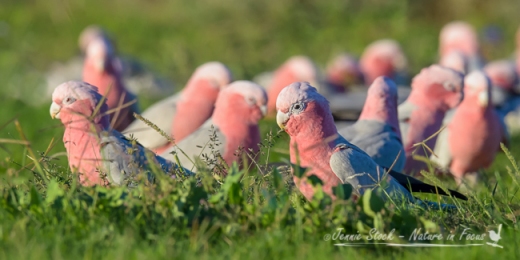 Flock of Galahs feeding on a grain spill in the wheatbelt

3 thoughts on “Corellas and cockatoos”