No visitor to Australia can fail to notice and be charmed by the colourful, noisy and endearing parrots found in this country. Some of the most brightly coloured are the beautiful rosellas. They all have a similar plumage pattern, with an obvious cheek patch. My favourites are the Crimson Rosellas, which unfortunately are only found over east. I am always amazed at how such brightly coloured birds can disappear into foliage and be hard to spot.

Eastern Rosellas feeding in the grass
Another brightly coloured and very noisy species is the Rainbow Lorikeet. Mainly found in the northern and eastern coast regions of Australia, they feed on the nectar and pollen of native plants, but have adapted to garden plants and will raid fruit when it is ripe. Unfortunately a population of these lorikeets has become established in Perth, as they out-compete local species for nest-hollows to the detriment of some of our endangered birds.

Rainbow Lorikeet sneaking a grape in the garden

Rainbow lorikeet enjoying our grapes
The Australian Ringneck is widespread across the country and varies quite a bit in colouration. My images are of the Western Australian races; the one with the red mark on the forehead is also known as the Twenty-eight Parrot (something to do with the call apparently). They can become quite tame/habituated if offered food, like the bird in the opening image which was taken at Donnelly River Village where people obviously often feed them.

Australian ringneck with berries for breakfast
Some of the prettiest parrots are very small and quite hard to get close to, such as Rock Parrots and Elegant Parrots (very similar) and the slightly larger Red-rumped Parrots. They mostly feed on the ground and are usually very wary, requiring a sneaky approach. There are some very beautiful birds in this group but many are very rare – maybe one day I’ll be lucky enough to photograph a few more species. 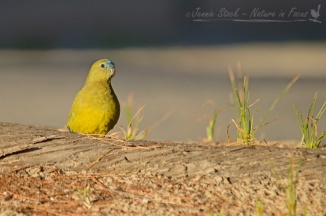 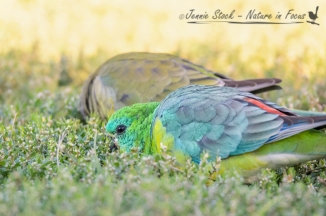 3 thoughts on “A celebration of Australian parrots”