Good sightings of elephant and buffalo quickly knocked two of the Big Five off the list, but the other three proved a bit more elusive. It was mid-week before anyone saw a cat, in the form of a rather distant leopard on the sandbank across the river from Skukuza camp, only seen by some of us who stayed in camp for a break. The next morning three of our group were lucky enough to see the leopard in the main photograph, at much closer quarters. I’m thrilled to have managed some decent images of this cat, as the light was terrible – thank goodness my camera has reasonable high ISO performance. I do love the way she is so camouflaged in the long grass. She was hunting and bolted across the road (terrible pics through the front windscreen) and soon disappeared into the thicker bush on the river edge. I hope she found some breakfast. 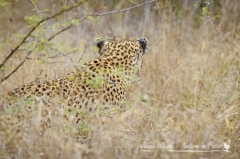 Where did it go?

We only realised how lucky we had been when we got back to camp for breakfast – we thought some of the others had also seen her but we’d misidentified the car in front of us! At least we all saw the white rhino the previous evening – I’m counting that as part of the Big Five even though strictly speaking I think it is meant to be a black rhino. The term Big Five refers to how dangerous the animals were to hunt on foot, so the black rhino would be more appropriate as they are much grumpier. This rhino didn’t seem very grouchy at all, having a moment with a starling on the road before drifting off into the bush. I just hope it gets to live peacefully and keep its horn – Kruger is not immune from the current rhino poaching epidemic.

Our last tick on the Big Five list was lion – not a very exciting sighting but at least we saw them, on a sandbank next to the river on the way from Skukuza to Lower Sabie. Lazing around as is usual for lions, for all the world as if they were on a summer holiday. If you look carefully at the one on the left, it has a radio-tracking collar around its neck.